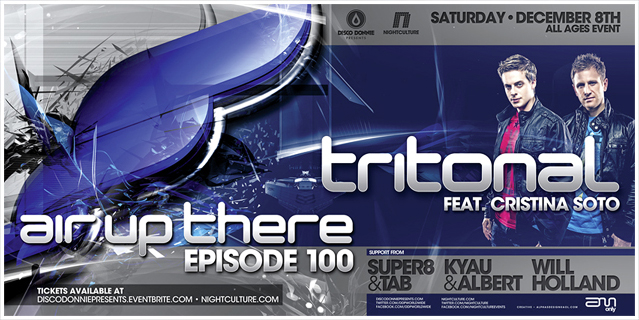 To celebrate 100 episodes of their popular radio show Air Up There, Austin-based DJ and production duo Tritonal will mark the occasion with a homecoming show at Emo’s East on Saturday, December 8.

The dynamic lineup will also feature fellow trance and progressive acts Super8 & Tab, Kyau & Albert, and Will Holland for a night of uplifting and energizing dance music. As a rare treat, Cristina Soto—the vocalist who has written and performed on many of Tritonal’s hit tracks, such as ‘Lifted,’ ‘Still With Me,’ and ‘Everafter’—will appear with the group. This all-ages event starts at 9PM (CT) and tickets are on sale now through emosaustin.com.

“Being able to celebrate 100 episodes of our radio show with a performance in our hometown of Austin means the world to us,” says Chad Cisneros, one half of Tritonal. “After touring the globe for the past year, ending up full circle where we started out is very inspiring.”

Recently crowned #65 on DJ Mag’s Top 100, Chad Cisneros and Dave Reed formed Tritonal in 2007 after meeting online on a sound forum and discussing their similar tastes in electronic dance music. Within a year of collaboration, their first smash hit ‘Piercing Quiet’ was voted best track by listeners of Armin van Buuren’s A State of Trance radio show and the pair was on the fast track to becoming one the industry’s most electrifying and innovative acts to watch.

In April 2008, they produced the first episode of Air Up There, their weekly radio show that provides listeners with an hour of the latest uplifting melodies, haunting vocals and euphoric dance tracks. Currently, Air Up There is syndicated on five continents and is broadcast weekly on American satellite station Sirius XM and on AH.fm to thousands of dedicated listeners.

“In the earlier episodes of Air Up There, we were still figuring out who we wanted to be as DJs and producers,” says Dave. “The show gave us a platform to experiment with our sound and grow our audience. I think it’s helped people feel connected to us, even if they’ve never seen us live.”

Thanks to their nonstop production and touring schedule, Tritonal have seen a meteoric rise in recognition, winning over legions of fans with their unforgettable performances at Electric Daisy Carnival, Escape From Wonderland, Ultra Music Festival, A State of Trance 550, and Creamfields Australia. Their debut artist album Piercing the Quiet produced eight top 20 Beatport singles, including six that held the #1 position on the trance chart. In September 2012, they released the anticipated follow-up, Piercing the Quiet Remixed, which landed in the top 5 iTunes Dance Albums.

“It’s been over two years since we’ve played a show in Austin and we couldn’t be more excited to finally show our friends, family and Texas fans what we’ve been up to,” says Chad.

Air Up There Episode 100 will be broadcasted live from Austin on Sirius XM’s Electric Area from 9PM – 2AM (CT) on December 8. To hear past episodes of the podcast, subscribe on iTunes.